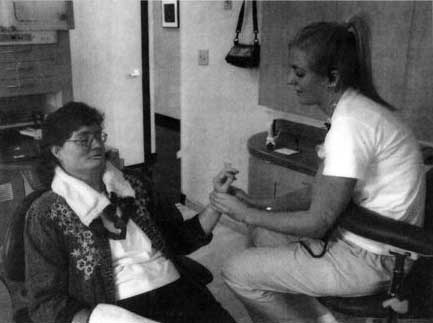 OKEMOS — Laura Graichen, receptionist at the facility, greeted Lora Lantis with a smile in the waiting area. They proceeded to the paraffin bath area for a hand dip and then went to her room where a heated herbal roll was wrapped around Lantis neck. After choosing a video to watch Lantis relaxed and received a hand and forearm massage. The next step in Lantis appointment is to have an area of her gums numbed in preparation for the Novocaine injection Dr Martin Valley will be administering before he begins her crown prep. Yes, you read right — Lantis is not at a day spa, she is at the Valley Dental Spa in Okemos. Lantis, of Morrice, is a longtime patient of the practice. “I know that the dentist is necessary, but I had avoided going for several years,” Lantis confessed. At that time, Lantis heard an advertisement on the radio for Dr. Martin Valley a Christian dentist in Okemos. She thought that sounded like the place for her.

“I called them and they got me in the next day. I love them they’re awesome.”
She and Valley reminisced about a duet they sang to a Newsboys tune just before he gave her that first painless injection. “I will never forget my old dentist saying. ‘Wider, open wider, wider,” said Lantis. “But with Valley. I didn’t feel a thing.” “The key is to go really slow and to give a little shake,” said Valley. “There isn’t any fatty tissue in the roof of your mouth, but there are a lot of nerves. The shake helps to distract the patient and to spread the medicine around.” “People leave here and go back to tell their co-workers about the great things that were done for them at their appointment.”

Valley is very open about his Christianity — which is another reason Lantis said she likes him. He prays with patients if they want him to. He speaks openly about his own faith and mission activities. Besides operating his dental Practice, Valley is a lay minister and is active in missionary dentistry.

The cost to the business of the spa treatments is offset by the increase in patients. The cost of paraffin and aromatherapy oils is far less than the marketing and advertising expenses that the practice has not had to spend.